Review – Among Thieves by Douglas Hulick 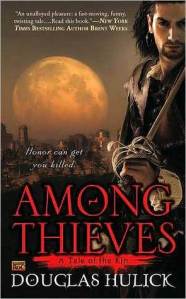 Among Thieves is the first novel in what looks to be a series and was sent to us by the publisher. This is a story about Drothe, a “nose” or person who takes bits of information and figures out what is actually happening before reporting or selling the knowledge. He also smuggles relics as a side business. He gets caught up in a mystery while running down one of his relics and is ordered by his boss to figure things out. The problem is, no one trusts each other in the thieves’ (aka kin) seedy underbelly of society, which is proved time and again in this twisting tale.  Just when you cross someone off your list of suspects, they pop back up with a different agenda. You really cannot expect or assume anything and it is quite a joy to read. Hulick says this novel took him 10 years to write, and you can tell that he has put thought into every sentence and nuance. The descriptions and the characters are a rich tapestry, along with the research on the thief dialect, which takes a little getting used since everyone can be referred to by either their name or occupation.

So this book opens with a pretty gruesome torture scene. For those of you who aren’t that excited about that type of thing, just know that it doesn’t last too long and while the rest of the book is just as bloody, at least most parties have a chance in a fight. It took me a little while to adjust to the novel and to get fully sucked in. It was very interesting and I enjoyed it, but my heart didn’t begin racing and I didn’t have to put the book down and walk away to calm down until after the first 150 pages or so. (I did that a couple of times just to reflect on what was just revealed.) As this story is told in the first person, the reader sees the story unfold as Drothe does, and let me just say, he doesn’t know that much for quite a while! Unraveling the twisted plot takes time and quite a few beatings on his part.

I really enjoyed this book. There is no romance, but there is magic, twists, plotting, warring factions, idiots, cunning and trickery, just between Drothe and his sister!, let alone within the rest of the thieves world. I am being a little cheeky about his relationship with his sister, but it isn’t too far off. Kind of fun actually, there is a lot to explore there if Hulick decides he wants to do that. The world building is amazing with an immortal emperor, his white sashes, Angels, gray princes (even further removed shadowy Kin working long-term power plays), Upright Men running the everyday Kin gangs and all the others. And everyone has an angle to play.

Drothe is a complex character who lives among the kin and does well in this world, but feels remorse for many of the horrors he is forced to commit to survive there. Not only that, he makes the hard choice time and again. He isn’t out for himself alone, but his family, the people under his protection, or fulfilling his commitments. In short, he chooses the hard road, but the seemingly right road. He does, however, fumble through much of this story. He doesn’t have any super powers, except a little night vision which tends to hinder him often, and the relationships he has built with the people he works with and trusts. It is actually nice to read about an average hero, instead of one with all the powers an author can think to give them.

I give this book a strong 4 stars and I really am looking forward to the next installment.

I love to read! I always have a book or four going, I have more books in my to-be-read pile than I can read in a year and yet I continue to haunt the bookstores. I have a problem, but I somehow soldier on. I enjoy talking books, so pass on your recommendations and thoughts - I would love to hear them.
View all posts by ocdreader »

Posted on 9 August 2011, in Fiction, Review. Bookmark the permalink. 2 Comments.