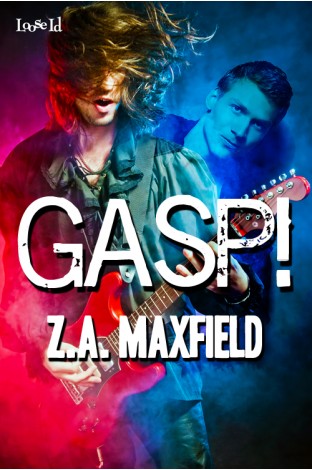 Z.A Maxfield’s newest book Gasp! is not to be missed.  The characters are strongly written and will pull you into their story right from the beginning.  Jeff Paxton is former military, and after serving in Afghanistan the young man is suffering from not only PTSD, but survivor’s guilt as well.  Nigel Gasp is a famous/infamous rock star.  Unfortunately, Nigel is not as young as he used to be which is causing more than a few insecurities to pop up.  Jeff never expected the favor he was doing for his sister to turn into anything more, yet the author chooses just that situation to bring together two men in desperate need of love, and ends up giving the reader a story that will hold their attention until the last page.

However, while the author brings these two together, she does not make their journey an easy one.  Between the issues that Jeff carries as a result of his time in the military, and Nigel’s sudden desire to check out, the men have more than a few obstacles to overcome.  The angst in this story is, at times, a little heavy but necessary to the story line.  Readers should know though that there are some light heart moments in Gasp! as well.  Not only does Nigel’s need for cross dressing lead to more than a few laughs, but Jeff’s encounter with a bear had me laughing out loud and I almost felt sorry for the young man, especially when the sheriff showed up .

Fans of Ms. Maxfield are sure to love her newest story and if you have not yet read one of this author’s books, then Gasp! is a great place to start.